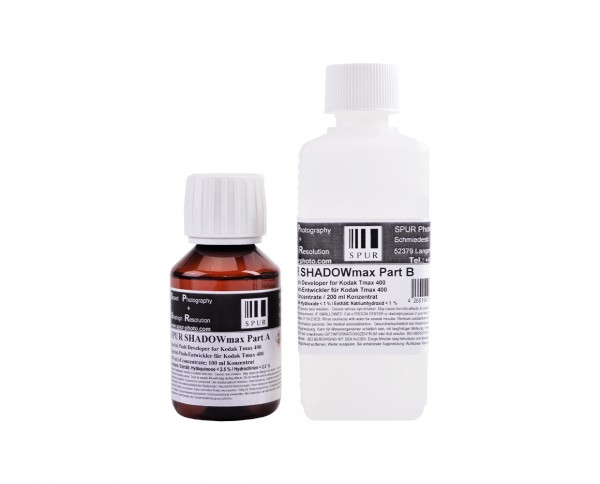 SPUR SHADOWmax is a special push developer for Kodak Tmax 400. With SHADOWmax you get results at a maximum ISO of 1600/33° which are not possible with any other developer.

That's why Tmax 400 can now be used at ISO 1600/33° by demanding photographers. All shadow details, normal contrast and normal highlights are present. The developed film has a fine grain, a resolution and a sharpness, which was previously unachievable at this sensitivity. The developed negative has excellent tonal values and looks as if ISO 1600/33° was the nominal sensitivity of this film. This opens up new possibilities for snapshots in rooms where flash photography is not allowed, e.g. in churches, in museums and in the theater.

Of course it has been possible to push Kodak Tmax 400 to ISO 1600/33° so far. However, the following disadvantages occur, which are considerably more serious than in other films:

1.) Shadow detail is basically not present
2.) Because of the character of this film, highlights become too dense and are blown out
3.) The larger grain caused by the increase in film speed is further increased by the resulting steep gradation
4.) In a compensating development (eg with Atomal), which partially avoids the aforementioned disadvantages, the sharpness as well as the shadow detail are completely sub-optimal.
All these disadvantages are completely avoided when using our new developer SPUR SHADOWmax.

Kodak Tmax 100 also achieves results previously considered impossible. The sensitivity of this film can be up to ISO 800/30°! with the same good tonal values that apply to the Kodak Tmax 400. Only the shadow detail is slightly lower at Tmax 100 from ISO 400/27° and higher.

SPUR SHADOWmax is a two-component developer, which consist of part A and B.