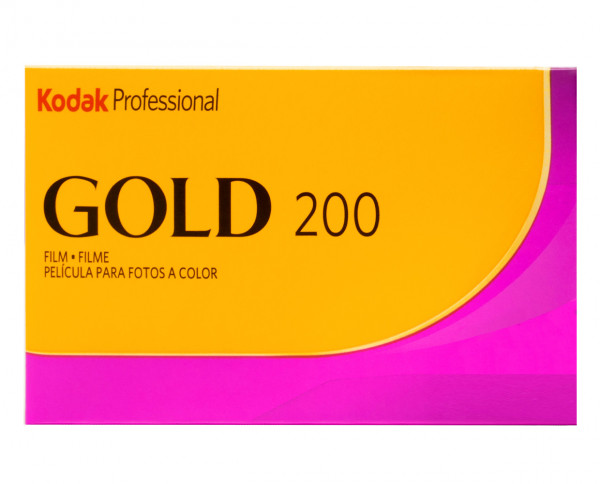 The new 120 format Kodak Professional Gold 200 is an affordable, entry-level colour film featuring an ideal combination of warm saturated colour, fine grain, and high sharpness.  It is designed for any level photographer for daylight and flash capture.

What a revival: Around 120 years after its original launch, Kodak has decided to further focus on medium format. In 1901, 120 roll film was developed for the Brownie No 2 camera; today, as the newest member of the Kodak Gold 200 family, it's considered the ideal choice for anyone looking to switch from 35mm to medium format. Why is that?

Kodak Gold 200 should be familiar to anyone who has ever shot analog: That's because the popular film was available for purchase in every store back in the day. And even today, Kodak Gold 200 is still the (gold) standard for analog beginners: warm, saturated colors, a particularly fine grain, and versatility - you can now get all that on 120 roll film.

So if you also want to take the step from 35mm to medium format: Now would be the perfect time! Compared to 35mm film, you can expect even finer grain, higher sharpness, and overall clearer image quality, even if you plan to make larger prints.

By the way: Kodak's medium format film, available in a pack of five, is not only convincing due to its high quality, it is also an inexpensive alternative to other Kodak film series - and, for example, 25% cheaper than PORTA or EKTAR.

Related links to "Kodak Gold 200 roll film 120 | pack of five"
Evaluations (0)
Customer evaluation for "Kodak Gold 200 roll film 120 | pack of five"
Write an evaluation
Evaluations will be activated after verification.
When you sign up you can get a coupon for your rating
Accessories Similar products Customers also bought Customers also viewed
Accessories
Shipping within the EU only!
Fuji C-41 X-Press Kit for 5l
€79.00
Content 5 Liter (€15.80 / 1 Liter)