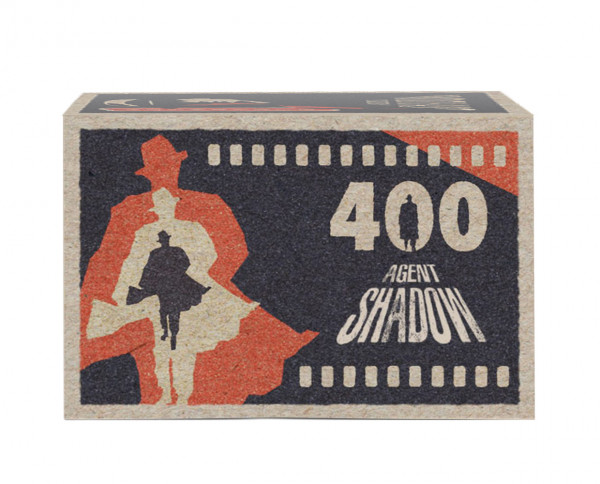 The dark, quiet streets lit by lamp. Alleyways with music and laughter drifting from a local bar. Underpasses as the trains whistle and rattle on the rails above. Pools of light in a city shrouded in darkness and mystery.

This is the world of Agent Shadow.

Three years ago, Kosmo Foto took 21st-Century film photography back to the 1960s with the launch of the Space Race-meets-Soviet-art Mono film. Now we turn the clock even further back, to the world of Film Noir cityscapes and a double agent around every corner: Meet our new film, Agent Shadow.

Agent Shadow is an ISO-400 panchromatic black-and-white 35mm film pushable to ISO 3200 – and beyond. It’s great for shooting at box speed for portraits or street photography, while also perfect for shooting when the light really gets low.

The film is made by one of the most famous names in film production, with nearly 150 years’ experience making film and photographic products.
It’s a 36-frame, ISO 400 with fine, atmospheric grain perfect for all 35mm film cameras.
Pushing the film (which means shooting and processing it as if it were an ISO 800, 1600 or 3200 film) boosts grain and contrast, adding a gritty atmosphere perfect for low-light street photography. Perfect for when you want to add a touch of that Film Noir feeling…

Agent Shadow is a tried-and-tested emulsion perfectly happy to be shot in lower light, letting you capture life at the dark end of the street. Capture witching-hour cityscapes with glorious grain; shine your lens on night-time escapades without needing the attention-grabbing announcement of a flash. Take portraits in shade and overcast window light. Step into the shadows and find a world in black-and-white just waiting to be documented.

So what are you waiting for?
Get inspired by the fragile looks and bring some Film Noir feeling to your works!