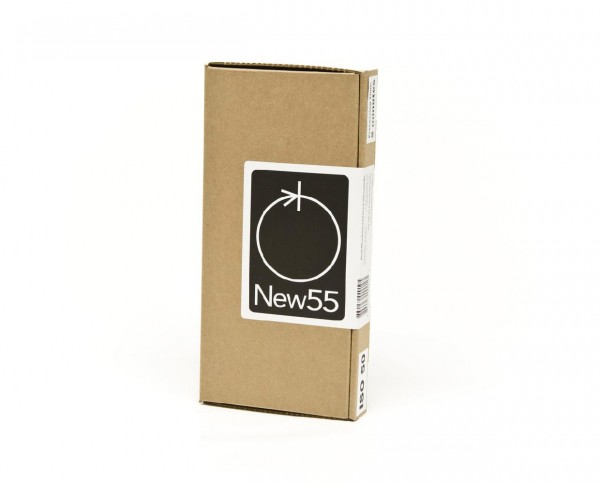 This product is currently not available.
Please inform me as soon as the product is available again.
€79.00
Content: 1 piece

New55 PN is a black and white 4x5 instant positive-negative sheet film that produces an instant negative and a positive print; it works with the famous 545 series of holders (545, 545i and 545 Pro). Each box contains 5 packs; each pack produces one 4x5 positive and one 4x5 negative that you further fix and wash (see Directions for Use).

This is Generation 2 instant film.  An improved receiver sheet coating process results in better DMax and DMin and smooth grayscale in the print, and the same superb negative for scanning and enlarging.

• Insert film packet into 545 holder in 'L' position (ensuring lens side out). Pull out Sleeve until the stop. Make your exposure.

• Replace the Sleeve back to its starting position.

• Pull the film packet through the holder smoothly and steadily.

• Place the film packet down on the counter and wait the given Processing Time.

• Remove the small silver Release Tab and pull the Tongue Assembly out of the Sleeve.

• Peel the Print off, keeping the Negative facing down (away from the light).

• Immediately place Tongue Assembly with the Negative attached face-down into a 50% solution of Ilford Rapid Fixer (Dilution 1:1, 50% fixer, 50% water) for 5-10 seconds. For best results fix immediately after processing and out of direct light. Minimal exposure to light before fixing is preferred.

• Fix the negative -- with emulsion side up -- for another minute or two and agitate a bit while the reagent goo floats free.

• Remove excess goo with a gloved finger, then place the Negative in a fresh water bath.

• Rinse for at least 5 minutes (A running tap can harm the soft emulsion).